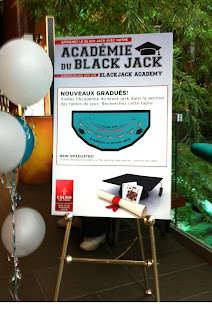 For those who want to play blackjack but don't understand the rules, can't count in their heads, or are just too shy to try it out, the Casino Lac-Leamy in Gatineau, Quebec, is offering a Blackjack Academy (Academie du Blackjack) for a limited time (on now until July 15). It's a 30 minute "course" given every hour between 10am and 10pm at a blackjack table by a real dealer using fake chips so the uninitiated can try it out, make silly mistakes, and practice without anyone complaining.
We signed up at the Casino members counter, and met our instructor, Judithe, at 2pm, our appointed time. With us were Jacques and Monique, a couple from Trois-Rivieres; Sebastien, a quiet young man from Montreal; and a late arrival in a suit. Judithe passed out piles of fake red chips and everyone listened as she explained the basics and referred to the chart placed at the table summarizing the rules of basic blackjack strategy. Jacques struggled with the mandatory hand signals for "hit" and "stay", and Monique struggled with the difference between "hit" and "double". Thirty minutes and a few practice hands later, we "graduated" and were given certificates for $10 match play at the graduation blackjack table ($10 minimum, the only one in the casino), $9.99 for buffet at the Banco restaurant (usually $21.99), and a card guaranteeing us a place at the graduation blackjack table within the next hour.
Sebastien, who had parlayed his stack of red practice chips ($5) into a small pile of green ones ($25) during our academy training, promptly grabbed a seat, put down his $10 match-play coupon and two real red chips, then busted out and left. Jacques and Monique sat at the far end of the table, and I took a place at the side.
Jacques had trouble remembering how to signal what he wanted to do, rather than just saying it, and kept trying to touch the cards - a BIG no-no in the casino. Monique wanted to double on a 12, but was politely dissuaded by the dealer, Caroline. I managed to turn $100 into $130 before trying to split 6s against Caroline's queen, but again, a polite "Are you sure you want to do that - would you like to look at the strategy chart?" from Caroline (and her review of the play on the chart, conveniently placed to her right) convinced me to hit instead, which gave me 21 and a winning hand.
Overall, the Academie du Blackjack was a friendly, no-stress way to learn the basics of blackjack, although people with absolutely no clue of how to play probably would not have been ready to do so after the brief introduction in thirty minutes. However, the gift certificates awarded at the conclusion of the session  make it worthwhile, both for novices and those who already know how to play. Also, the $10 minimum graduation table, located adjacent to the Academie table was a friendly place to practice our newly-acquired blackjack skills, with both the dealers, pit bosses and other tablemates offering helpful, friendly advice, and allowing the newbies to rethink silly decisions and also take their time before deciding what to do.
I had fun in this no-judgement introduction to blackjack, a game I had wanted to try before but was too intimidated by the action at the regular tables to do so. I eventually lost my winnings back to the house, but spent a pleasant hour going up and down with my newfound friends Monique and Jacques. I am happy to report that he did eventually learn to not touch the cards, and hit blackjack three times in a row.

Read more about Lac-Leamy: Art at the Hilton Lac-Leamy, Fabulous Martini Flights, and  Restaurant Le Baccara.
Posted by JCL at 22:45

JCL
I love to travel, both alone and with my family. This blog reports on recent visits and interesting experiences.